While politics are dividing the nation, the off-Broadway Blue Man Group (BMG) act, celebrating its 25-year anniversary, continue to provide an escape for people around the world.

“I don’t think we need any more politics right now,” Chris Wink, one of the three founders of the now world-renowned act said to the Brooklyn Service on Thursday. “People come to see Blue Man to maybe get away from that.”

Standing outside Astor Place Theater in Manhattan, where the BMG has performed over 13,000 times, Wink, joined by Phil Stanton and Matt Goldman, stood at a podium to accept a proclamation from the New York City Mayor’s Office. The proclamation from mayor Bill de Blasio thanked the group for its charitable work and near three-decades of entertainment. As part of the ceremony, Astor Place was renamed Blue Man Way for the day. 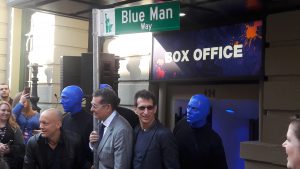 About 40 fans huddled around the box office outside the theater to join the festivities. After the formal ceremony, the BMG performers hit the street, dressed in full attire, launching piles of flowing white streamers into the sky. The steamers engulfed the audience, including a golden retriever, whose tail starting wagging more intensely as more streamers hit the sky.

“As a kid from Georgia, I came here not knowing what to expect,” Stanton, the lone member of the trio not born in New York, said. “I found the world, really. I found people from every part of the world around here, every culture, every religion is represented here. It’s just fitting that Blue Man would happen here [in NYC]; Blue Man who’s from nowhere but [is] from everywhere.”

The show is in a constant state of refinement as tries it to remain current with pop culture references but still be relatable. The goal, as Wick puts it, is to have a show where kids can have fun and not think of it as “their parents’ show.”

In 1991, Wick, Goldman, and Stanton collaborated on a project that began with a cult-like New York City following and formed into an international entity. The BMG theatrical production has grown so large, it’s stationed in cities like Boston, Chicago, Las Vegas, and Orlando, and performed in countries like Germany and the United Kingdom.

“I feel like we’re three of the luckiest people in the world,” Goldman said. “It’s more fun now than ever.”

Wick said he enjoyed performing as Blue Man, Stanton enjoys entertaining the audience, and Goldman simply appreciates the fact that he gets to work with his best friends.

“We created the show but what’s kept it afloat over the last 25 years is the people,” Wink said.

The BMG will continue its tour of celebration by lighting up the Empire State Building in blue later tonight. Later this week, wax figures of the blue men will debut at Madame Tussauds near Times Square. It’s a testament to BMG’s persistence and longevity.

“I heard if we last another 25 years,” Wink said jokingly while pointing to the Blue Man Street sign created in their honor. “It will become permanent.”