In her youth, Gianna Mancini used to enjoy sledding in the municipal parking lot at the Junction in Brooklyn’s Flatbush section. It was mostly empty then, and there were fewer people walking through the shopping district.

“I remember having to watch my back when I got off of the train,” said Mancini, 27, who has lived in the neighborhood for 20 years. “It’s a lot different now.”

Different not only because of the influx of different retailers and different types of people within the community, but primarily because of the opening of the Triangle Junction – a shopping center that was built over the parking lot where Mancini once sledded.

The area known as the Junction–the name stems from its history of being a transfer point for trolley lines–has seen dramatic changes over the past six years as more consumers travel there for their everyday shopping and dining needs. The Triangle Junction opened up in 2009, near the crossing of Flatbush and Nostrand avenues, housing what was then the largest Target in America. At a whopping 225,000 square feet, Target is undeniably the outlet’s anchor. Home Goods, The Children’s Place, David’s Bridal, Men’s Warehouse, Verizon, AT&T, Payless Shoe Source, and an Applebee’s moved in. Nike and Dallas BBQ opened nearby.

It’s a dramatic change for a shopping district that had previously been home mainly to fast-food and West Indian takeout restaurants, bodegas, discount stores and greengrocers. 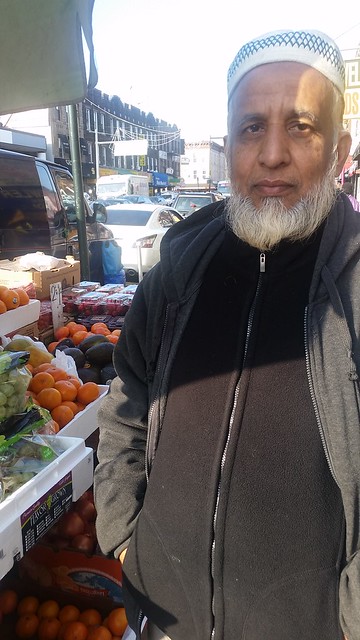 Slideshow: A tour of small businesses at the Junction.(Deja Smith)

The mall draws heavy foot traffic since the Junction is the last stop on two of Brooklyn’s most traveled subway lines, the 2 and the 5. Bus lines converge there, bringing passengers from southern Brooklyn neighborhoods that don’t have subway service. The Junction is also a block away from Brooklyn College, which has 16,000 students.

Yet, with the introduction of larger chain restaurants and stores, residents fear that an area that they once called home will soon be unrecognizable.
“The area is becoming really gentrified. I’ve lived here almost all of my life and it’s amazing to see the changes just within the last few years,” Mancini said.

FROM 2007: NEW MALL EXPECTED TO BRING CHANGES TO BROOKLYN’S `JUNCTION’

Many residents fear that the changes will resemble those which took place downtown with the construction of the Barclays Center, which opened in 2012.

Fatima Walden, 25, has been a lifelong resident of Brooklyn, and had a lot to say about gentrification. “Downtown they ripped apart apartment buildings, they put hundreds of people out of their homes and promised them jobs that they never received,” she said. “I can see that happening in the Flatbush Junction area.”

Flatbush residents have already seen rents go up sharply in the Midwood and Ditmas Park sections.

“We saw it happen downtown,” Mancini said, referring to the Atlantic Yards development that began with the Barclays Center. “They offered people money for their apartment once, maybe even twice, but by the third time they were offered crumbs, if anything at all. And by that time there was a new owner in place who had the power to move people out, against their will.”

At a November meeting of Community Board 14, which encompasses the Junction, concerns were expressed about apartment buildings potentially being built, with rents that would price out current residents. “The only way I would allow more apartment buildings to be built [in the area] is if I can ensure that my daughter would be able to afford it,” one resident said.

Residents were also concerned about the design of some of these apartment buildings for fear that they would potentially “clash” with some of the more historic Victorian homes in the area.

After 4 p.m. on a weekday you will see hundreds of people streaming the streets at the Junction: workers coming off the subway; adolescents and young adults coming from school. It is an opportunity for retailers to capitalize on.
New Stores and Services

“Applebee’s is a good place to meet new people, because it’s such a busy place,” said Nikyra Singleton, 22, a senior at Brooklyn College. “I like Applebee’s for their cheap drinks. I go there every Tuesday after class.” Applebee’s, which doubles as a restaurant and sports bar, has many deals and specials to draw customers, including weekday happy hour that offers half-price drinks and appetizers.

But although she enjoys the new businesses at the Junction, Singleton had reservations.

“I really feel like Brooklyn is trying to be down, they are doing too much,” Singleton said.“My father grew up over here, this is his ‘’hood,’ and I feel like they are taking away from people’s lifestyles, and changing it.”

A Flatbush Junction Business Improvement District was created to assist the development, and there is a bustle on the streets that was not there before. Kenneth Mbonu, executive director of Flatbush Business Improvement District since this past March and a Bedford-Stuyvesant resident, said his role “is to improve the quality of life of the businesses and the residents who support the business. Bottom line.”

In October, the Flatbush BID threw an event to help introduce the residents of the area to owners and workers at the various restaurants and stores located at the Junction. About 100 residents and students turned out to the event on Nostrand Avenue, near the Dallas BBQ.
It seemed that the residents were in high spirits about the whole thing.

“The BBQ’s here and it attracts a lot of customers . . . I think it’s [a] more positive change because at first nobody really wanted to be outside like that,” said Myrella Murray, 27, who attended the event. “Now my friends who live in other areas in Brooklyn call me to come out and have drinks at the Junction.” Murray also remarked that even in the year that she has lived in Flatbush, she has noticed a lot of changes and a lot of new stores coming in.

Anna Sosa, a freelance independent contractor who works as the BID’s event planner and was formerly known as its merchandiser in residence, said this was the second event that she has done with the Flatbush Junction BID.

Sosa, who has over nine years’ experience in corporate merchandising and event planning, expressed concerns and hopes for the future of the Junction.
“I really enjoy touching base with the community,” said Sosa as she also noted that her primary goal is to help the smaller businesses to grow and develop because they “really need more attention in order to ensure their sustainability.”

Many businesses get introduced to the area, but according to a few long-time employees at the Junction, not many of them stay.

Fortunately this is not the case for Erin Santoli, 39, who has worked as a salesperson serving customers at Lord’s Bakery for the past decade.
“Business is good,” Santoli said. “This is a really busy time of the year for us because of the holidays; our most famous cake is red velvet. It’s everyone’s favorite; we make it the best and we also make it the cheapest.”

Lord’s Bakery is a family-owned bakery which has been serving sweets at the Junction for over 40 years.

Santoli said rents increased at the Junction and that businesses come and go frequently. “Things change so quickly here, it’s sad, the rent has gone through the roof” for other business in the Junction, she said.

Santoli expressed no worries about Lord’s business, saying it has loyal customers who have been coming to the bakery for decades. And a key factor is that the owner of the bakery owns its building. ”He’s not going anywhere,” said Santoli, who grew up in the area.

Right outside of Lord’s Bakery, on any given weekday is Mohammed Rashid stationed with his fruit cart. Rashid, 58, has been selling fruit at that location since 2006. “The buildings change, everything changed, everything grow up,” Rashid said of the Junction.

Rashid, who migrated to New York City from Bangladesh in 2001, started working for another fruit cart owner and now has his own. Rashid formerly had his fruit cart business in Manhattan, but decided to move his cart to Flatbush, because it was much closer to his home on Coney Island Avenue.What used to be two hours of commuting every day in his van is now a 10-minute drive, and he says he is sustaining his family-he has a wife and two sons–even better than he did in Manhattan.

“Flatbush is good for me,” he said.

Anthony Bellay, 63, has been at ABC Liquors since he was 19 years old. The store has been on Flatbush Avenue since the 1940s, making it one of the oldest businesses at the Junction. Bellay has seen many changes at the Junction in the more than 40 years he has worked there. The population was once primarily white, especially of Irish and Italian origin, he said. After that, there was an influx of West Indian people. And now, according to Bellay, “it’s changing again.”

Bellay also saw a plus in the Brooklyn College Residence Hall at Kenilworth Place near the Junction. It opened in 2010 and houses students who attend the college. This brought new faces in the area, Bellay said/ He notices how Brooklyn College is expanding and, according to him, “the neighborhood is better.”