There would be 50 to 500 tickets available per game, he told a gathering at the Brooklyn Historical Society as an exhibit opened to remember the Brooklyn Americans, a professional hockey team that played in the borough in the 1940s.

“We can make Friday night at the rink hip, cool, and attractive,” Adams said. “We need to make hockey sexy to the urban kid.”

The Islanders, who moved to Brooklyn last October after years 43 years in Nassau County, face the task of winning over a new and much more diverse fan base. The market in Brooklyn, where a majority of the population is black or Latino, differs greatly from the suburban area where the Islanders were based. The fact is that hockey is not the most popular sport in the borough — compared to baseball, football, and basketball.

“Brooklyn is the second most diverse county in the United States,” said Lee Igel, associate professor at the Tisch Institute for Sports, Media and Business at NYU. The Islanders need “to welcome the diversity, the integration, and start educating the public about the game. Players going into the schools and participating in other events in the community are how they can go out and make a difference.” 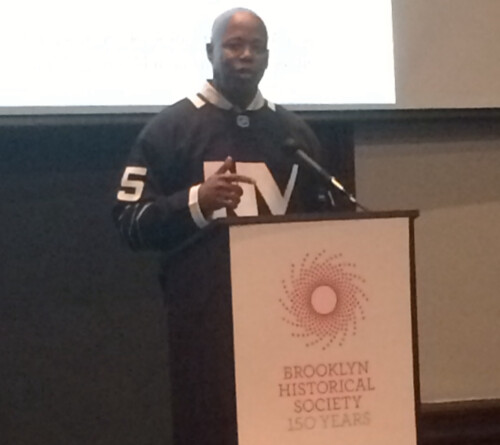 Professional hockey’s history in Brooklyn dates back to when the Brooklyn Americans were a part of the National Hockey League in the 1941-’42 season.The Americans franchise had to stop operations because of World War II. In 1946, the franchise was canceled after it was unable to build an arena in Brooklyn. A lot has changed in the borough since that time, including the influx of different cultures. Players and fans are mostly white, but Brooklyn is not. It means that the Islanders have an opportunity to draw new fans who may not be familiar with the sport.

“Brooklyn has a few advantages that will help gain new fans,” said Glenn Gerstner, the chairman and associate professor of sports management at St. John’s University. “The borough is not car friendly, so if people want to catch a game, they can take the bus or take the subway.”

Business-wise, the Islanders and Barclays Center have a strange connection. “The agreement between the two sides does pose problems, including that they have turned their entire operations over to those who run the Nets,” Gerstner said. The problem is that business operations for hockey differ from those for basketball. Fans differ, and so do game operations. For marketing, Gerstner said, attracting new fans in Brooklyn will come down to the Islanders getting the attention of the “casual” hockey fan.

“The team must bring in fans that will want to come to a game, and experience it live,” he said.

To attract the casual fan, having a winning product could make the most impact. In terms of finding a way for the community to embrace the sport, the Islanders must pitch their product to people and get them interested in hockey.

“They must teach people the game,” Gerstner said. “Begin to push marginal fans to what the game means, and what it is all about.”
He also noted that there is a bit of difficulty in getting people interested in hockey; tickets can be an expensive proposition.

Gerstner does believe though that Brooklynites will accept the team. “People will identify with the Islanders,” he said. “They will bring pride to the borough.”

As a new team coming into a new area, it’s not very hard to pinpoint that the Islanders are out of their element. The Siena Research Institute at Siena College did a 2013 poll in which New York sports fans ranked their favorite teams. Only 13 percent follow hockey.

While Brooklyn is not the biggest hockey hotbed, 33 percent of Islanders ticket sales pre-season were to Brooklyn residents.

Growing a fan-base in a diverse borough isn’t easy, but there are several ways it can be done. The Islanders will have to follow the Nets’ path, playing to a younger generation. When the Nets moved to Brooklyn, they were invading Knicks territory. The Nets plastered their all-star lineup all over city buses, created a swank look for sports apparel that fit in with Brooklyn’s hip-hop culture, and had artists Jay Z and Beyonce sporting the colors courtside to enhance the image.

Many of the Nets’ fans are black or Latino. Those basketball fans are the people the Islanders will be tasked with turning into hockey fans. Spreading their brand will help in achieving this goal.

In a short time, the team has taken steps to connect its brand to Brooklynites by unveiling a black-and-white uniform — the Nets colors — and placing advertisements around Barclays Center and other parts of the borough. In the Modell’s Sporting Goods store across the street from Barclays Center, Islanders merchandise is at the front of the store with the team’s original blue and orange gear next to the new black and white garb.

“The move so far has been 50/50,” said fan Vicdia Mone, 53, from Jamaica, Queens. “You know for me, they need to have a little more camaraderie.” Mone, who has been to five games so far this season, said the team and the media needs to talk about the Islanders being in Brooklyn now. “It’s actually a good move. The building as you know was not made for hockey, but they can do well here,” Mone said.

Mone said the Islanders came out with the new marketing scheme, new uniform, and “Brooklyn Pride” nights because of the Nets. “You see how the Nets sell, and they sell a lot. So I think they, the Islanders, will.”

Mone, who is African American, added the team doesn’t seem to be catching on with other black fans. “Nah, I don’t see it. But they can promote it,” he said. “Brooklyn is the fourth largest city in the country.” He suggested putting ice rinks in the neighborhoods to increase interest in the sport.

“The task is to really make the team a part of the community,” said Igel, the NYU sports management expert. “It sounds simple, but it’s not easy to do.” Igel said that for the team to start drawing new fans from Brooklyn, it needs to get the marketing and ticket sales department revved up. “It’s a long term proposition. The transition won’t happen overnight,” Igel said. As for the tradition and the brand that the Islanders bring, Igel says it will be up to a Brooklynites to pick it up and run with it.

“It’s a simple concept that is not easy to pull off in practice,” Igel added. “The borough has to know that the team and franchise care.” Igel said hockey is a great sport, and that for Brooklynites, the interest will hopefully grow more as time passes.

“People will still turn out to see great athletes over time,” Igel said when asked if different cultures would come out even though hockey players are predominantly white.

Brooklyn Heights resident and Islanders fan blogger Joseph Buono says that if he had to grade the move so far, he would give it in an incomplete. “It has been frustrating that with three years to prepare, Barclays Center management missed on so many obvious things that would have catered to the die-hard Islanders fans that have had their game day experience turned upside down,” Buono said. He believes there has been too much focus on creating a new fan base instead of keeping the fans who have attended games for years in Nassau County. “Like all sports teams, new fans will be created when exposed to hockey, and if the team is a winner. It will undoubtedly take time, but I expected them to be more ahead of the curve than they are.”

Buono is very critical of new marketing tactics the Islanders and Barclays Center have incorporated. He acknowledged the black-and-white jersey has sold well, but he added that the colors are a complete fabrication dreamed up by Jay Z and Nets and Brett Yormark when the Nets moved to Brooklyn in 2012.” Yormark is the chief executive officer of the Nets and Barclays Center.

“Hockey fans are not casual fans,” Buono said. “No one in Brooklyn is going to buy season tickets because of team colors. They need to focus on exposing new fans to the sport and the rest will take care of itself.”