On a September afternoon in Washington Heights, shouts of protest could be heard in Spanish along Broadway. “Here we are! Here we stay! ¡Aquí estamos! Aquí nos quedamos!” elderly residents shouted . They were there to defend their senior center in Washington Heights near 174th Street and Broadway. In April, Fern Hertzberg, executive director of the ARC Senior Center, received a letter that the owners of the building would not be renewing their lease agreement and that their current lease would expire on Dec. 31.

Finally, Adriano Espaillat, New York state senator and congressional hopeful, showed up and surrounded himself with the elderly, encouraging their chants in Spanish. Espaillat, 62, was born in the Dominican Republic and is running against Republican Tony Evans for the 13th Congressional District in upper Manhattan and portions of the Bronx.

On Tuesday, he won an easy victory with 89 percent of the vote, becoming  the first Dominican elected to Congress. His message was “putting families first” and to support policies that stand up for those at a disadvantage.

“This center is important because it’s one of the best centers in New York City,” Espaillat said as he began to address the crowd and reporters. “Now, I have been in touch with the reverend,” he added, referring to pastor of Christ Church United Methodist, which houses the senior center. “He is saying that they are giving the center a month to month lease for six months. That’s unacceptable! The other tenants down [on the block] are empty; my hunch is that the church and the owners are trying to flip these two properties and make them luxury or market-rate housing. We will fight that tooth and nail!”

Espaillat finished and then repeated what he said in Spanish, with cheers from the elderly who still surround him. 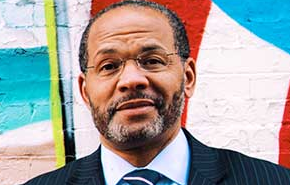 Espaillat’s opponent, Tony Evans, also saw the problem with gentrification in the neighborhood. Evans lives in Harlem and has been witness to the rising rents, a trend confirmed in a New York University Furman Center report released in May that shows that Harlem has seen a 53 percent rent increase between 1990 and 2014.

“Rents rise faster than incomes – but our leaders do nothing to stop it!” according to Evans’s website. Rising rents are his top priority listed because “the housing sector in New York City is a broken system.”

Espaillat wants “federally designated anti-gentrification zones,” according to the Huffington Post. He would represent some of the most rapidly gentrifying neighborhoods in a district that includes Central Harlem, East Harlem, and Morningside Heights.

Fighting for the ARC Senior Center in Washington Heights is right up his ally.

Its struggle helps show the dangers that Espaillat sees in gentrification in Washington Heights. Espaillat told the crowd, “If this happens here, it could happen to any center across this neighborhood.” According to the website for Moriah Senior Center, Washington Heights and Inwood are the two neighborhoods in New York City that have the highest percentage of seniors, leading to fears that if one center closes, others could close too.

Shuli Gutmann, director of the Moriah Senior Center, stood next to Espaillat and later spoke about the challenge that seniors face. “We are a generation that fetishizes new and forgets our seniors. We must remember that we will be seniors one day and we need to take care of them,” she said.

Comments from Hertzberg help show just how many people the closing of the ARC Senior Center would affect. “We have been in the heart of this community since 1970. We have almost 4,000 members coming to us on a regular basis, over 200 a day. This is their second home, they want us to be here, they want us to stay,” she said. “This is where we started and this is where we need to be.”

The “second home” for the seniors provides wellness workshops, dancing, arts and culture, and other social services, along with a kitchen that can provide healthy meals for those who aren’t able to cook. Its location is pivotal as it is one block away from J. Hood Wright Park, allowing easy and quick access for the seniors to spend time outside. The seniors range from 65 to 104 years old.

Efforts to reach the Senior Center and contact Hertzberg for updates on the lease renewal were not successful. There was no comment from the church when it was contacted for input concerning the ARC Senior Center lease and its landlord.

← Newer Post
Easy Ride back to Congress for Clarke
Older Post →
A Sure Thing: Dilan Returned to State Senate