Swimming through the sewage-infested waters of the Gowanus Canal, Christopher Swain had to paddle through a thick layer of dirty yellow foam that floated on top of the water, trying not to let it touch his face. He felt like a senior citizen at her local pool, trying not to get her hair wet. Swain said he wore cream on his face to protect from the water in case it did touch his skin.

Swain started at the top of the canal, just north of Douglass Street between Bond Street and Nevins Street in Brooklyn, and swam the 1.8-mile length of the canal into New York Harbor, where he let the fresh harbor water wash away the filth of the Gowanus Canal.

“It was like swimming in a dirty diaper,” Swain said. “I tried not to get a ton of water in my mouth, but I could taste metal and hydraulic fluid, it was so potent.” Chunks of coal tar also floated by, he said.

But now the first steps toward a cleanup of the notoriously polluted canal are underway in the form of two retention tanks being installed to store the sewage that overflows and usually ends up in the canal during heavy rain. This begins a major Environnmental Protection Agency cleaning process that will cost roughly $506 million, and aims to make the canal clean enough for recreational use.

In a rapidly changing Gowanus neighborhood, this is a pressing issue for the neighborhood population, new and old. No one is a fan of toxic water, but the prospect that a clean canal will make the local real estate more attractive – driving up rents too high for many current residents and prompting development of luxury housing – has become the talk of Gowanus.

Gowanus Creek was dug out and turned into the Gowanus Canal in the 1860s to be used for industrial transport in local waters. Future recreational use of the canal could bring a new boating industry to fruition.

“The Gowanus is ideal for boating,” said environmental planner Eymund Diegel,a local expert on the canal and a member of Swain’s team for the swim. “There’s very little current, and it’s actually quite nice at sunset.”

Moms, dads and children of the new family-oriented Brooklyn neighborhood often spend afternoons on the Whole Foods patio by the side of the canal on 3rd Street, with massive wood burners next to the Whole Foods, an attempt to mask the smell of the putrid water. There is even a Twitter account dedicated to updating Brooklynites daily about the canal’s odor in case these families want to check its status before getting the strollers out.

“Everyone that approached me was up for a swimmable canal,” Swain said of the local people who came out to watch him swim in the deep green water. “People were shaking my hand and I think everyone respects what we’re trying to do here.” 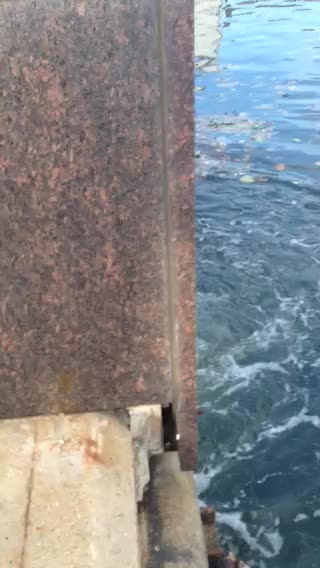 “Quality of life would be better for the community if the Gowanus was clean,” said Haley Block, who works at a hair salon next to the canal of 3rd Street and frequents the Whole Foods patio. “There’s not many other nature spots around here, and it’d be good for people to have a clean canal in their neighborhood. It says something about us as a community.”

“It’d be nice if it didn’t smell so bad,” said Alexia Gautier, a nanny who goes to the Whole Foods patio with the baby she watches. “But then again if it was clean, this spot would get very crowded.”

Gautier is among the many people who already live in fear of the changing culture and economic tides in popular Brooklyn neighborhoods.

“If the canal was cleaned, I don’t think we could afford to be here,” said Welland Scripps, co-founder of the Letter of Marque Theater Company, which has a studio down the road from the canal.

“The neighborhood has been changing and will keep changing,” Scarlet M. Rivera, another co-founder of Letter of Marque, said. “As the community gets cleaned up, it gets less affordable to be here.”

Still, said Nolan Kennedy, another founder of the theater, “I think it would be nice to have the canal be cleaned. It would be like a small New England boat town, or Red Hook.”

Gowanus is home to a myriad of art studios, and produces a prolific Brooklyn art culture amid the industrial space. Brooklyn needs the industry and arts and much as they need Brooklyn, but the problem is that the canal lies partly with the industrial sites and art studios around it, adding to the impurities of the water.

Swain’s swim in the Gowanus on Oct. 17 was his second attempt at the feat. In April he tried to swim the canal but the water was so thick with feces that he wasn’t able to complete the task. It was particularly thick that day because there was heavy rain the previous night, which led the outdated sewage system to overflow into the canal as it very often does.

“It was so thick, I would have been too exhausted to continue not even half way down it,” Swain said.

The coal tar level in the water and the soil at the bottom and around the canal is the real issue with the canal and one of the main reasons the EPA is involved, according to Diegel.

With a long history of industrial dumping of toxic pollutants, and sewage overflows, the Gowanus Canal remains one of the nation’s most heavily polluted bodies of water, according to the EPA. Among the impurities in the canal are polychlorinated biphenyl waste, coal tar, heavy metals, volatile organics, and dangerous diseases that get into the water through the human waste, such as gonorrhea, according to the EPA and Diegel.

“Whatever your roommate has, or the guy down the hall has,” Diegel said, “it gets into the canal at some point, even if it’s just for a little while.”

An example of how this water can pose health risks can be found in the case of a dolphin that found its way through New York Harbor into the Gowanus Canal in 2013. The dolphin lasted a day before dying in the canal. The autopsy of the animal afterwards showed a damaged kidney, stomach ulcers, liver parasites, and an empty gastrointestinal tract, according to the Riverhead Foundation, an animal rescue organization in New York. It is unclear if those ailments were brought on by the canal, but officials said it couldn’t have helped.

All of this renders the canal unable unusable as a recreational site in the up-and-coming neighborhoods it runs through: Gowanus, Carroll Gardens, and Park Slope. Under the Clean Water Act of 1972, all American bodies of water must be able to be used for recreational purposes, such as swimming, fishing, and boating.

Fish weren’t always able to survive in the water of the canal, but in May 2014, the Flushing tunnel, which connects the Gowanus to Buttermilk Channel in the East River, was activated. The tunnel pumps around 250 million gallons of fresh water into the canal daily. This gives oxygen to the stagnant waters of the canal, allowing fish to breathe. Also, the lack of a predatory presence in the canal allows small minnows to survive in vast numbers, according to Diegel.

While the fish can survive, they are still living in human waste, accumulated oil, sludge, and heavy metals, thus making them harmful to eat. Under the Clean Water Act, the EPA is bound to the mission of making the canal clean enough to fish in.

The environmental agency’s plan is a fairly simple but expensive one. It starts with dredging, or scraping, the 10 to 20 feet of oil and grease sludge from the bottom. Getting all of it would be nearly impossible; there will be more oil and grease coming in through abandoned factory tanks left behind, and from nearby restaurants dumping grease down a drain instead of properly disposing of it.

“Restaurants have sky rocketed in this area, and they have a substantial amount of grease to get rid of,” Diegel said. “And there’s a protocol for that. But as is the case with any percentage, there are people just dumping it down the drain, which gets flushed into the canal along with your roommate’s feces.”

Next step is to stabilize, or sanitize, the canal floor. A thick layer of this cleaned sediment will be laid on top of the coal tar-contaminated sediment, followed by a multi-layered “cap,” consisting of a material that will remove contamination that wells up through the sediment, then a layer of sand and gravel, a thicker layer of gravel and stone to protect from erosion, and then a layer of sand that will fill the cracks between the stones, and create a livable habitat, according to EPA documents.

In dealing with the sewage, the EPA is requiring that two retention tanks be installed in key parts of the sewage system where it is most vulnerable. They are being installed currently; one at the head of the canal, and one underneath the pools of Thomas Greene Park. These 8 million gallon tanks will catch the overflow from sewage system during storms, before it is discharged into the canal. According to the EPA, this will reduce the waste in the canal anywhere from 50 percent to 74 percent.

While this plan will, when executed, clean the canal drastically, there will still be work to be done. Diegel has been mapping the canal’s history to the 17th century, and with the maps he can see the changes in the canal’s size throughout its history. For example, according to one of his maps, the Gowanus Whole Foods is sitting on top of a very large pond that is still there, underground, today. Using this method of cartography, Diegel can pinpoint underground freshwater streams. These streams can be tapped and connected to the canal again to give it a flow of more fresh water, keeping it oxidized and moving.

Beyond that, it is up to the community. Policy must keep restaurants from improperly dumping their grease, and the same for art studios and their paint. According to Diegel, most of the heavy metals in the canal come from paint, yellow specifically, being poured down drains instead of being properly disposed.

According to an EPA responsiveness summary, there was pushback in the community against the cleaning. Fifteen businesses and 700 residents were in support of the construction of a facility that would be used to dispose of contaminated sediment from the canal, while 900 other residents locally and in other parts of the city opposed the construction of this facility, according to EPA documents.

The city Department of Environmental Protection, in documents sent to the EPA, claimed that the sewage overflow are not contributing to the contamination of the canal. City officials also state in these documents that more study needs to be done before construction of anything begins, according to the EPA responsiveness summary.

“It will all happen with time,” Diegel said assuredly. “Sustainable development is really in over here now.” According to Diegel, 90 percent of the new buildings being made in the area are working towards LEED (Leadership in Energy & Environmental Design) certification. This will contribute to the clean up of not only the canal but the land as a whole.

Said Diegel: “You won’t recognize this place in 20 years.”