Colombian citizens living in New York City  are keeping tabs on the peace agreements being sorted out in Bogota between President Juan Manuel Santos and the guerilla-rebel group, the Revolutionary Armed Forces of Colombia, or FARC.

The 52-year-long war in Colombia between the government and the left-wing rebels is historically one of the longest wars in the region, affecting residents across the country as the government in the capital city of Bogota fought the FARC guerillas in the jungles stretching up to the North. The treaty, for which President Santos recently won the Nobel Prize, was surprisingly voted down by a slim margin on Oct. 2. This came as a shock to most Colombians in New York City.

“The people who lived through war voted ‘yes’ to peace and the people who voted ‘no,’ never lived through it. We are a little selfish, because we don’t see the war, we don’t live the war,” said Milton Carvajal Peleaz, 29, who is visiting the United States from Manizales, Colombia. “Why [do] the people that live in the cities not want the guerillas in Congress? It isn’t fair because they never lived the war. But the people on the farms, in the countryside, they say ‘I don’t care, I don’t care, just no more war.”

According to a 2012 Pew Research Center report, 14 percent of the 1.1 million Colombians living in the United States reside in New York City. To ensure a chance to vote on the peace treaty, polling sites were set up for Colombians at the Colombian Consulate in Midtown, throughout Queens, and in parts of New Jersey. 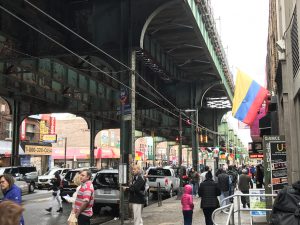 Colombians in Queens voted on a peace treaty.

“I was in Washington, D.C. recently and there were political analysts there and they tried to explain how the ‘no’ vote would affect the different communities in our culture, like black people, the farmers and women,” said Lilliana Bernal, 32, a native of Manizales, Colombia, residing in Dyker Heights, Brooklyn. “It’s not only a deal between FARC and the government, it’s a change for our people. It will change our legacy. What the ‘no’ vote means … is uncertainty.”

Currently, the ceasefire remains between FARC and the Colombian government while President Santos sorts out revisions of the treaty and discusses differences with opposing politicians. The uncertainty in the outcome is sparking activism among a younger generation of Colombians in both the U.S. and Colombia.

“Living here, it doesn’t affect me directly, but it is my country, which I love so much,” said Maria Isabella, a student at Guttman Community College in Manhattan, and an immigrant from Bogota. “Even though they have been negotiating for four years, it’s only now that the people are really getting involved. I want peace but I want peace that favors the majority of the Colombians. I don’t want a peace manipulated.”

Colombians are taking to the streets in Bogota, protesting, demonstrating and following every step of the peace-treaty negotiations, while residents in New York City are voicing their positions and maintaining involvement heavily through social media.

“It shouldn’t have been a political thing. It was about the people. But our country is part of a very exciting moment because people are going to the streets and fighting for their rights and for peace,” said Bernal. “I’m sad that I’m not there now because this is a really important moment. It’s the young people who want peace and everyday they are marching. Marching for peace now – for a new deal now while there is this ceasefire – before people go back to their arms.”

Photos by Derek Norman. Top: The Colombian consulate in Manhattan was one of the locations in New York where Colombians voted on a peace treaty.