As I walked down Avenue J in Midwood toward the Tznius Princess shop, the women around me were dressed a lot differently than I was. Their skirts were below their knees, and some covered their hair with wigs.

As I approached the wedding dress store in this Orthodox Jewish enclave, I became more and more nervous. I hoped that I, a Latina from Queens, wasn’t offending anyone by walking in dressed with a pair of black jeans.

As I rang the doorbell, I was relieved to see a warm welcoming smile just behind the glass door.

When it comes to fashion, a religiously observant Jewish woman must evaluate her beliefs, morals, and values before deciding on how she should dress. The number of inches below the elbow or the knee, the cut, fabric and the colors will reflect how Jewish women balance religious and cultural factors with their sense of style.

The result is a thriving trade of stores in the Midwood section, an Orthodox Jewish neighborhood not far from where I attend school at Brooklyn College. Stores specialize in clothing tailored for the tastes of local women. This means they are filled with skirts that pass the knees, blouses made to cover women’s collar bones, and even head scarves and wigs that married women wear to cover their hair, according to Jewish law.

“There are different views in different Jewish groups as to the appropriate style of dress and the definition of modesty,” said Rabbi Elie Abadie of the Edmond J. Safra Synagogue on Manhattan’s Upper East Side. But, he said, there is one basic description of what is considered a modest way of dress.

Abadie said that is found in the Code of Jewish Law that Rabbi Joseph Karo wrote in the 16th century. “The sleeves have to reach to the elbow inclusively, the length of the dress has to reach the knees inclusively, the neck area has to cover the clavicular bone, and the dress cannot be see through or very shapely and tight fit,” he said.

Some ultra-Orthodox Jewish groups are a bit stricter and ask that women cover more of the body.

The reason so much emphasis is placed on the way a woman should dress is that Jewish law demands it, according to Abadie. He says that it “demonstrates the character of a woman” and that it suggests a woman is humble; dressing this way allows a woman to show respect and value for herself.

“In Judaism, women are not an object of desire, a toy or at the mercy of men’s passion. Therefore, they should not be used as sexual objects,” Abadie says.

But, even though modesty in a Jewish woman is praised, Abadie believes that a woman should not be considered less religious if she does not dress this modestly.

“A woman who does not dress very modestly may be a very pious woman in other areas, like in keeping kosher, respecting the Sabbath, keeping family purity laws, being charitable, taking care of the needy and poor, honesty and doer of acts of loving kindness,” says Abadie. Therefore religion should come from within.

Inez Sharaby, a 21-year-old college student and newlywed who lives in Brooklyn, considers herself a religious Jewish woman but feels that she doesn’t have to dress in long skirts and blouses that cover her collar bones and elbows in order to prove how religious she really is.

“I consider myself just as religious, since I pray, keep kosher, observe Shabbat and all the Jewish laws,” says Sharaby. Her religion is very important to her and she takes it very seriously.

“Being a good Jew means to observe the laws and be good to those around them, something you can do in a skirt or in pants,” Sharaby says. “I consider myself to be religious and I’m very spiritual when it comes to Judaism, I don’t think the fact that I wear pants and short sleeves puts me on a lower level than someone who doesn’t.”

But being a young woman in the Jewish faith and keeping up with such a dress code can be difficult sometimes. Even I, as young woman, seem to still be trying to figure out who I am and trying to learn as much as I can about my culture and religion. So I can only imagine the pressure these women have from those around them like their parents, rabbis, and even friends..

Abadie says that judgments do occur but, “It is usually limited to certain Jewish enclaves where modesty is considered a must and therefore, there are public signs and announcements, encouraging modesty.”

Jill Mamiye, a 16-year-old high school student from Ocean Township in New Jersey, seems to have found the balance between her religion and the way that she dresses. For Mamiye, “clothing that doesn’t draw attention and that doesn’t show off my body” is what she considers appropriate. But this wasn’t always the case.

“As a person who didn’t always dress modestly, I know what it’s like to be on the un-modest side. I value people based on their insides, and never the exterior,” Mamiye says. “No two people are on the same religious level. I think it’s important to grow spiritually on the inside, and then to perfect your exterior modesty.”

Her decision to dress traditionally was important for her because her family values and encourages it. But there wasn’t any pressure for her to make this decision, she said. “My family is supportive of any type of dress. They are happy I chose to dress modestly because I am happy.” Mamiye said she feels the freedom to choose what style of dress is best for her and her beliefs.

She loves that her family is accepting of whatever choice she makes and also believes people shouldn’t judge others on how they dress. “It’s important that you value people not on the way they dress, but on the way they act,” Mamiye says.

There is not only judgment inside the Jewish community, but also outside. Many Jewish women have faced discrimination just because of the way they dress, they say.

“I have been judged by people of my culture and not of my culture because of the way I dress,” Mamiye said. “It is not easy to always dress modestly, especially when most of my friends do not. In order to deal with these situations I have to remember why I dress the way I do. Dressing modestly shows people that I’m more than a body.”

Although sometimes dressing the way she does causes Mamiye to be judged by others, she reminds herself that this is important to her and her beliefs.

Abadie says that although Jewish women are supposed to dress a certain way according to Jewish law, when entering public places, such as a gym, they must be aware, conscious, and respectful of the dress code of that institution.

Yosefa Jalal, an Orthodox Jewish woman from Crown Heights, Brooklyn, was barred from working out in a gym because of her long skirt. Her membership at Lucille Roberts was revoked when she refused to leave because of how she was dressed. She was asked to leave because her attired did not meet the gym dress code, and when she didn’t she was continually harassed, threatened with arrest and eventually had her membership revoked, according to the New York Post.

Such reactions sometimes lead Orthodox Jewish women to think twice about their attire.

“Some Jewish women may feel discriminated against due to their modest dress and they may change a bit their dressing because of such a discrimination,” Abadie says. “It is a shame that they have to do that and are not able to express themselves and their modesty.” 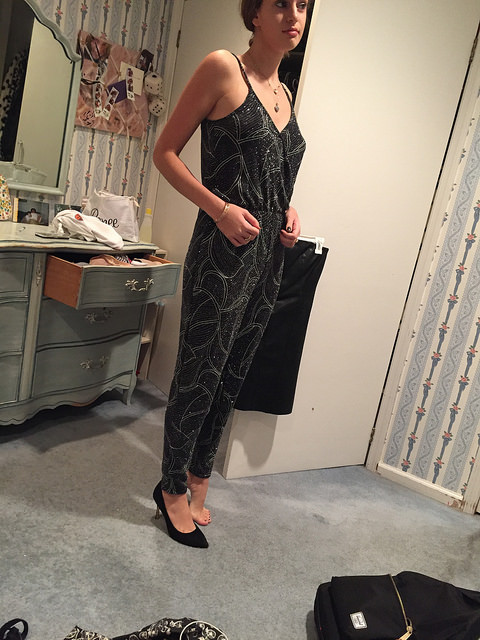 Unlike some Jewish women, Renee Beyda a 20-year-old Orthodox Jewish student from Brooklyn, said she is religiously observant but does not think twice about the way that she dresses. Beyda feels comfortable dressing in jeans and a t-shirt, but still considers herself religious and respects women who choose to dress traditionally. “I respect modestly dressed Jewish girls for the effort and strength they have while being able to dress that way, but I never wished I would dress more modestly,” she said. “I enjoy dressing with my own sense of style.”

Although Beyda dresses in jeans and a t-shirt on a day-to-day basis, she respects the rules of dress when going to synagogue. “I go to a pretty religious Orthodox shul so when I go on holidays I follow the rules pretty strictly. I cover my knees, wear tights, and cover my elbows and collarbones too. I am still slightly judged by the other congregants but only because they cover more extremely whereas I cover just enough.”

Beyda says the other, more conservative women stare at her and she can tell they are whispering things to each other about the way that she is dressed.

As a single woman, I wondered if it was as hard for an Orthodox Jewish woman to find a husband as it is for any other woman. With religion being a big part of their lives and clothing important to their religion, I found myself questioning how the two affected each other.

Beyda said she isn’t worried that her style of dress will affect her prospects among the men in her community. “I don’t believe the way I dress affects how I find men,” she said. “I am not looking for a man who is ultra-religious. Therefore he wouldn’t care about how I would be dressed.”

Mamiye, who dresses traditionally in long skirts and shirts covering her elbows and collarbones, says that for her, finding a husband shouldn’t be hard. “A man should value a woman based on her personality, not her body. A modest woman is mysterious, and doesn’t show off her body in unnecessary ways,” she said. “This should be appealing to a man, who would know that his wife’s body is for him to see only.”

Finding a wedding dress that fits with the restrictions in Jewish law can be a little difficult.

While Sharaby doesn’t dress traditionally on a day-to-day basis, she knew what type of dress was considered proper and she was able to pick one out that was appropriate enough but could still feel beautiful and comfortable in her decision.

She told me the dress was strapless with a sweetheart neckline, with beautiful beading detail throughout the corset and a full princess tulle skirt. She did however tell me that, out of respect for her religion, she wore a cover up over her dress to cover her collarbones and elbows. The cover up was sheer with small beading details around the shoulders, elbows, and neck area.

Polina Ruderman, owner of the Tznius Princess wedding dress shop on Avenue J, says that her store is fit for any Jewish woman looking for her perfect dress.

An appropriate dress for a Jewish woman “covers the collar bone, covers elbows at least two to three inches, three to four inches below the knee, depending on how religious you are, and no see-through sleeves,” she told me.

Ruderman’s store was opened with Torah-observant Jewish women in mind. All of Ruderman’s dresses are custom-made, which means that a bride coming into her store has no problem finding a dress. She says she can make anything a bride envisions.

Ruderman was inspired to open this store because she felt that there weren’t many dress shops that catered to Orthodox Jewish women. Finding a wedding dress is tough for any woman, but with all the rules that observant Jewish women must follow, the process can seem much more difficult.

Ruderman helps ease this process. Although she does dress modestly, she says that she doesn’t mind when women who don’t share her outlook come in to shop, explaining, “Business is business.”