Under the cover of a gray sky, Queens Councilman Jimmy Van Bramer and transportation advocates called for stiffer enforcement of illegal parking regulations.

The Thursday gathering was held on the southeast corner of 43 Ave. and Crescent St. in Long Island City, which is home to a number of construction sites. The location was fitting. Nearby were cars parked on the sidewalk or double parked on the street.

“Let me be very clear, sidewalks are not made for cars to be parking on them,” bellowed Van Bramer. “It is illegal and there is no excuse.” 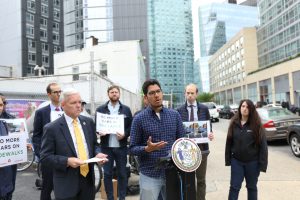 He added, “It is not just inconvenient, it is dangerous and it’s potentially deadly. There are so many people in this community, moms with strollers, those with disabilities, and everyone else simply trying to get to and from where they need to get to safely. It is an epidemic not just in Long Island City but all over the city of New York and it has to end and it has to end now.”

For Van Bramer and advocates like the transportation advocacy group Transalt, the solution is two fold.

The first is a robust implementation of the #techforsaftey initiative, which calls for new cameras that would give tickets to cars parked illegally on sidewalks, bike lanes, and other inappropriate places. The initiative is currently being drafted for submission to the City Council. Van Bramer said the final wording is being put into ink and an actual bill should be submitted soon.

The second solution is for the New York Police Department to take a more serious approach to enforcing parking regulations, particularly parking placard misuse that has drawn ire from the public. So much so, locals have taken it upon themselves to create the #placardabuse twitter account reporting abuse of placards issued by the NYPD and other city agencies.

Placard abuse has become such a contentious issue that Mayor de Blasio held a press conference in February, promising to repair the placard system and crack down on illegal parking infractions. The administration intends to phase out physical placards by 2021 in favor of a digital “pay by plate” system. In the interim, the administration vowed to crack down on enforcement via a new Department of Transportation (DOT) taskforce and a three-strike policy that would lead to permanent revocation of placards for habitual abusers.

Despite the promises, until serious efforts are made by the NYPD and DOT, local activists like Transalt Queens committee chair Laura Shepherd are not convinced. “Parking on sidewalks is not a victimless crime,” said Shepherd. She added, “No matter how many 311 reports we make, how  many reports we file with councilman Van Bramer or the 108 (police precinct), often our reports are closed because by the time police can catch up the offender has driven off the sidewalk or bike lane wherever they’ve endangered us. Even overnight, simply by parking there they block visibility for people walking and biking and puts us in even more danger and increase the risks. It’s not a victimless crime.”

← Newer Post
The Spotlight Thursday was on Anna Delvey, Socialite Who Stole Hearts and Money
Older Post →
New York State Comptroller: The Building Industry is Essential to Our Economy