Anna Sorokin, better known Anna Delvey, was blinded by the glitz and glamour of the lavish style she was living as a lie. Thursday, Delvey, 28, came into the New York courtroom with a black cocktail dress, large prescription glasses, hair neatly coiffed, hands behind her back. The well-dressed social media influencer received a sentence of 4-12 years in prison for eight counts of grand larceny. She was also hit with over $200,000 in fines for attempts to steal millions of dollars through multiple scams, such as fake money wiring and for not paying for services during her time spent in lavish hotels.

According to prosecutors, the brazenness of her crimes was a reason for demanding the times in prison. Another reason was for falsely telling people she was a German heiress. 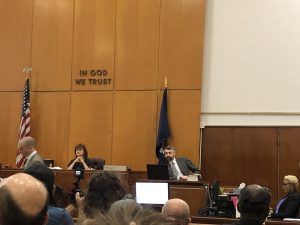 Prosecutor Catherine McCaw argued that Delvey was not taking her case seriously and cared more about her physical appearance than her case. “Anytime she showed emotion was because she was not happy with the clothing,” McCaw said. “She laughed when you gave her hearing last time. Her conduct throughout the case was not acceptable.”

There was talk among those in the courtroom about Delvey’s lawyer having hired a celebrity stylist for her court appearances.

Todd Spodek, another prosecutor, referred to Delvey as someone who was a victim of herself. “She was a 25-year-old that got ahead of herself,” he said. “She’s young and a non-violent criminal.”

At her time to speak, Judge Diane Kiesel said, “The defendant still seems clueless. She was more concerned of who was going to play her in a Netflix series.” Judge Kiesel ended, saying, “The sentence should be a message to her followers of the consequences of the lifestyle the defendant has led.”