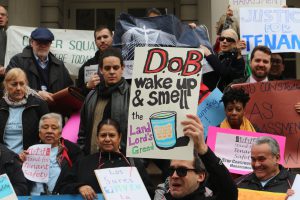 Tenant activists rallied on Thursday  in support of City Council legislation to end the use of construction as harassment by landlords, which they said was too common in the city.

“I think construction as tenant harassment is rampant in every borough,”said Alex Lee, Project coordinator and Housing Organizer for Cooper Square Committee.  “It’s up to the city councilmembers to take more of their time to know what’s at stake here in their districts. There needs to be a better awareness amongst them. It’s going to be an ongoing battle but the more support we get from elected officials the quicker this legislation can get passed.”

The legislation aims to eliminate loopholes that landlords have abused in the past such as lying on work permits and saying that a building is unoccupied just to speed up construction.

The bills also were designed to create more transparency between tenants and landlords by forcing landlords to post a “Safe Construction Bill of Rights” at least 14 days to the start of construction work that will detail the hours of construction, what work is being done, and how the work will effect the tenants.

In the 12 years that Juana Sensio has lived in her Red Hook apartment she says the communication between the tenants and landlord has been nonexistent. She was given “no notices” of the construction which began on her floor last Tuesday.

“There’s been construction going on in the floor above my apartment and the apartment across from from me and the shaking from the the renovations are making stuff from my walls fall off,” she said.

One thing was made clear by the about a hundred people at the rally. They want change soon.

“We demand a systematic reform of the Department of Buildings,”said Deputy director for St. Nick’s alliance, Rolando Guzman. “We are here today because well over a year ago we were all standing here, tenants, elected officials, community leaders, introducing the legislation to reform the Department of Buildings,” s “We are here again to say that enough is enough. We can’t wait more we want it now.”

To find out more about each bill go to the “Stand for Tenant Safety” website.