Marie Covin was an American war correspondent who was killed while reporting on the Syrian civil war in 2012.

Colvin worked briefly for the Teamsters Local 237, before she started her journalism career at United Press International, a year after graduating from Yale.

The Marie Colvin Award was created to honor courageous women from New York like Marie, who make a difference in the world.

Today the awards went to three School Safety Agents who fought in court for equal salaries, doing so on behalf of 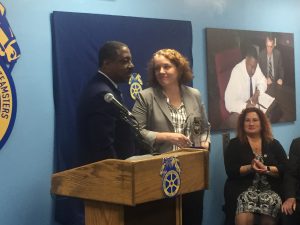 women working in other city agencies.

The president of the Teamsters Local 237, Gregory Floyd, opened the ceremony with a few words:

“Marie Colvin is an assassinated war correspondent. She walked the halls of this building. She spoke to many people, some are in this room today. Colvin was a Teamster and none of us could ever wear the shoes she walked among us. Marie was murdered in Syria. She wrote about innocent women and children caught in the crossfire  of civil war.  She was reporting from a country that did not want the true story of suffering to come out. She was in a country that called the media the ‘enemy of the people.’”

Joe McDermott, president of the Consortium for Worker Education, met Colvin years ago when she applied for a job as a journalist at the Teamsters Local 237. He said that now he remembers her with pride:

“I interviewed her and she was smart and beautiful and funny. She liked being around tough guys. She went from the UPI (United Press International) to Washington, then to London. She interviewed (controversial assassinated leader of Libya, Muammar) Gaddafi. Then she became a professional, reporting on violence . . . and talking about doctors and nurses operating with only a lamp light. She saw what a journalist could do when a story was available. She saw that words could carry the tragedy. Then there’s the explosion that took her left eye. Amazingly so, already famous, with the eye patch she became an icon.”

The emotional tone of the reunion got the guests to give a round of applause to McDermott.

“Marie always cared about the people struggling and about the challenges they were facing, and she didn’t make a distinction between children being killed in a war zone and the children not having enough food here in New York. I have three kids, and Marie often saw the faces of my children in the victims of war that she was covering.”