The bright and colorful Channel Garden brightens the surrounding area, even on a gloomy day like Thursday at Rockefeller Center. The tourist attraction has a new installation for Easter, a 20-foot bird’s nest and large blue eggs that children can go inside and play with. 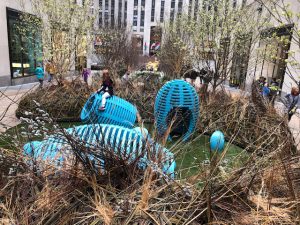 The section is small with amazingly green soft grass and gold birds over the nest, adding to the beautiful scenery. Although it’s surrounded by buildings and stores, the garden still brings a sense of peace and nature for those wanting to escape reality for a moment.

The unique and beautiful garden is part of a tradition of celebrating Easter in the biggest and brightest way possible. Every season, the garden displays exotic plants with gushy designs. The garden brings tons of tourists adding it to the list of many things they have seen in the Big Apple.

A family of four from Brazil stood around on Thursday morning with their professional-looking camera, taking pictures of their children playing on the life-size eggs. Although there was a bit of a language barrier, the mother (Rauma) was able to give her opinion to this English-speaking reporter. 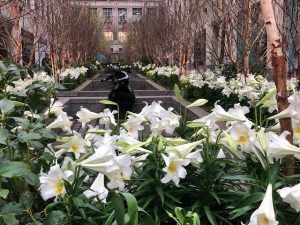 “This is a beautiful place, and my kids like it a lot.”

The area doesn’t only attract tourists. Those who work the area also like to stop by. A woman named Maribel Cruz took pictures on her way to work nearby. “It’s prettier around this time because of the flowers, and the fountains are normally on when it’s warmer,” she said. “Sometimes they’ll put cute rubber ducks inside of them.”

Not much has changed over the decades. Well, not a lot. There are many more tourists in these recent years. They join New Yorkers coming to look at the constantly changing garden to see what’s new and take in the ambiance.