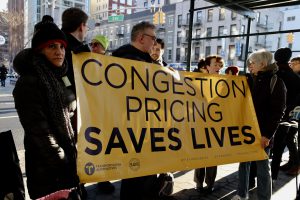 “Congestion pricing now!” rally-goers shouted Thursday morning, in the cold weather on the Upper East Side of Manhattan, right across the Queensboro Bridge.

“We’re here today because as you can see . . . this intersection is extremely dangerous,” said Erwin Figueroa, senior organizer at Transportation Alternatives. “We have thousands of vehicles every day going through this bridge because it’s the only free bridge between Queens and Manhattan.”

According to Figueroa, it is time for drivers to pay their fair shares. And the only way to do that, he said, is by implementing congestion pricing.

“If there are any congestion pricing deniers, if they just stand right here for ten minutes, they can be proven wrong with the amount of cars at the intersection,” he said. “It is beyond horrendous.”

Congestion pricing advocates are suggesting an $11.52 surcharge for cars, a $25.34 charge for trucks, and $2 to $5 per ride on for-hire vehicles entering congestion areas. It is an effort to fix the crumbling mass transit system in New York City. It is notable that both Mayor Bill de Blasio and Governor Andrew Cuomo support the plan.

As if to prove a point, Council Member Benjamin Kallos was traveling to the rally on a bus, it got held up in traffic, making him late. 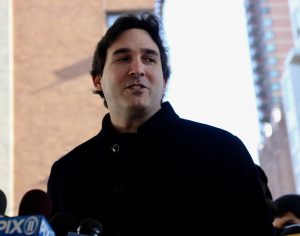 “He’s stuck on a bus, which is a prime example of why congestion pricing is needed,” Figueroa said. “No one can ride the bus without being stuck every single day. ”

As cameramen started putting away their equipment, Kallos appeared.

“I’m Council Member Ben Kallos and I got stuck in congestion on my way here this morning,” he said. “The delays we face as New Yorkers have huge costs to our lives. Sometimes it means we miss a medical appointment, sometimes it means we’re late to work and we lose that valuable money if we’re being paid by the hour. It could even mean losing a job.”

In speaking, Kallos pointed to one of the most dangerous intersections in the neighborhood—the entrance to Manhattan from the Queensboro Bridge. 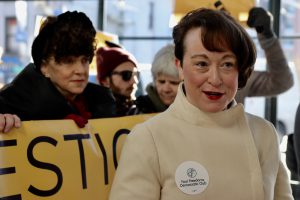 “We know that congestion pricing is an urgent public health issue,” Gold said. “You can practically see the air here because of all the congestion.”

President of Four Freedoms Democratic Club Bridget Cusick said that if political rivals like Cuomo and de Blasio could come together on this issue, why can’t everyone else?

Kallos acknowledged that he probably would’ve gotten to the rally quicker if he decided to walk instead. And that’s a problem, he said.

“We need to get this done because congestion pricing will save lives, it will save jobs, and it will give everybody a better commute,” he said. “It’s going to make NYC a much more livable city.”