Gwen Carr’s son, Eric Garner, was killed after being put in a chokehold by NYPD Officer Daniel Pantaleo, and Pantaleo is yet to be held accountable for his alleged crime that occurred over four years ago. 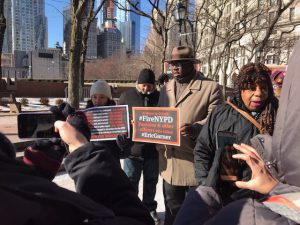 “It’s been four and a half years, and I have been waiting with no results,” Carr said Thursday, in the frigid temperatures of New York City. She had just come out from the disciplinary hearing for Pantaleo, in which,

sources said, he didn’t show up to the hearing at all.

Carr added, “the trial on May 13th – I hope they go forward with this trial and don’t delay it any longer.”

In July of 2014, Garner died in custody of the police as video shows he was choked by Pantaleo. Garner had expressed irritation that police were, in his opinion, harassing him for selling “loosies” (individual cigarettes). Pantaleo had put his arms around Garner’s neck, applying force, choking him, though Garner had been shouting that he couldn’t breathe.

Towards the end of the Thursday protest gathering, Rev. Kevin McCall said, “We are not going to allow this to continue to happen. This process has taken long. Every day she gets up, and this officer is still receiving a check, and officers are still receiving money. It’s maybe cold on the outside, but on the inside we’re fired up.”