The future of flight in New York and New Jersey is a bright one, according to Port Authority Executive Director Richard Cotton.

On Thursday, Cotton issued an official progress report of the Port Authority’s project to renovate the city’s airports and usher them into the twenty-first century. 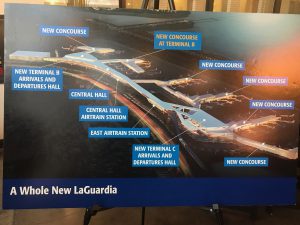 “Today’s discussion is not about planning, it’s about moving forward,” said Cotton, as he revealed the major renovations coming to the major New York and New Jersey airports.

One of these renovations comes in the form of a railway system that would connect directly to LaGuardia airport. “LaGuardia is the only major East Coast airport without a rail connection,” Cotton said. “The new air train would go from midtown to LaGuardia in 30 minutes or less.”

As for the airport itself, Cotton presented photos of a brand new concourse at Terminal B. The new concourse will be 250,000 square feet, hold 18 gates, as well as various concessions, and two airline lounges.

As for JFK, that historic airport has fallen on hard times in recent years, its once high reputation having diminished quite a bit, according to Cotton.

“JFK is ranked 69th out of the 100 busiest airports in the U.S.,” he said. “Our goal is to bring JFK into the twenty first century, and the top ten.”

In order to make that happen, JFK will finally make use of one of its long abandoned terminals. The TWA flight center was opened in 1962, but closed in 2001 because it could not support the size of modern aircrafts. Although the terminal got stuck in time, it will not stay that way for long, according to Cotton. Cotton spoke at an event hosted by the Association for a Better New York, held at The Mezzanine, on Broadway in Manhattan. 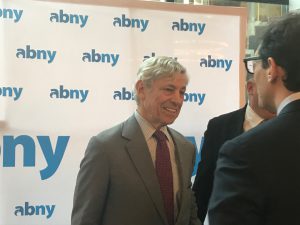 The Port Authority on Thursday revealed images for the TWA hotel, which is set to open on May 15. Not only will the new hotel increase public interest, but several changes to outdated terminals within the airport will increase productivity.

In New Jersey, Newark International airport is also due for a face lift, as three new terminals are planned to be added by 2022.

Although the major airports were the focal points of Thursday’s presentation, Cotton emphasized that the Port Authority is looking to improve more than just the airports. He said he wanted to transform the entire travel experience. A new emphasis on the customer experience includes free and fast WiFi, family friendly services and amenities, and even food delivery directly to airport gates.

After a presentation of groundbreaking innovations, Cotton reaffirmed the Port Authority’s primary ambition.

“Our goal is to transform our airports, and our customer service to best in class.”