By Tywanna Webb and Alexander Parisel

New York City’s construction industry has added over 43,000 jobs between 2010 and 2018, according to the report released by New York State Comptroller Thomas DiNapoli on Thursday.

“While the nation has yet to recover all the construction jobs it lost during the Great Recession, New York’s construction industry is booming,” said DiNapoli. DiNapoli addressed the reports’ data at a gathering with the General Society of Mechanics and Tradesmen, at the society’s office in Midtown. 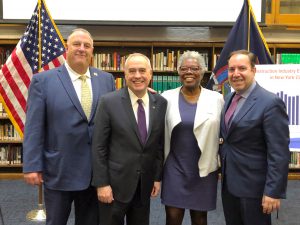 New York state has the fourth largest construction industry in the nation, coming behind California, Texas and Florida.  New York City’s construction employment was the highest of all cities in the nation for 2018, with over 409,000 jobs.

The report highlights the contribution of the city’s construction industry to the strengthening of the state’s economy. In 2018, city construction firms generated an estimated $84 billion in economic activity.

“Your efforts have really helped ensure that New York City’s economy has been able been able to come back stronger and stronger,” said DiNapoli.

In the city, construction projects like Hudson Yards, the World Trade Center and the Pacific Park Project have contributed significantly to the positive numbers. In 2017, construction was the fourth highest paying employment sector in the city, paying out a total of $11.9 billion in wages. The average salary was $80,200.

DiNapoli said the construction industry is special because many of its high earning jobs do not require a college degree.

Not having a college degree “doesn’t mean you can’t get a good, middle class job and provide for your family,” DiNapoli said. “This industry provides that kind of pathway.”

Penda Aiken said she is evidence of the importance of the construction sector to survial of the working class in the city. Aiken said her father was one of the first African-American brick masons admitted to the union. He was able to raise seven children with his salary.

“That is clearly an indication of the success one can have for himself and his family if given the opportunity,” Aiken said. Aiken now owns Penda Aiken Inc., a staffing solutions company.

In 2017, immigrants held 59% of the city’s construction jobs, the highest rate in the nation.

“Immigration has been positive for our city and certainly for our state,” said DiNapoli.

The city’s industry saw an 40 percent increase in the number of female workers between 2007 and 2017.  Despite that increase, women account for only nine percent of the city’s construction workforce.

DiNapoli said the report show that the construction industry is critical in the city’s social and physical development.

“It suggests that in order to keep strengthening our economy, we need to continue to foster forward momentum in the construction industry here in New York City.”

← Newer Post
Van Bramer and Transportation Advocates Demand End to Sidewalk Parking and Placard Abuse
Older Post →
To the Governor, the Actress, the CEO, the Designer and the Entrepreneur: Happy Mothers Day!