Just in time for the first snow of the year, New York Cares kicked off its 30th annual Coat Drive, aiming to collect hundreds of thousands of coats and provide them to New Yorkers who need them.

The drive’s kickoff was held at P.S. 188, near Alphabet City, slang for Lower Manhattan. Ninety-one percent of students at the school qualify for free- or reduced-cost lunch. Dozens of kids lined up throughout the two-hour kickoff to collect a game-like card with “one coat” written on it. Volunteers then led them to a rack of fresh-looking coats to choose one for themselves.

The kickoff was well attended by dozens of members of the press and philanthropy organizations. 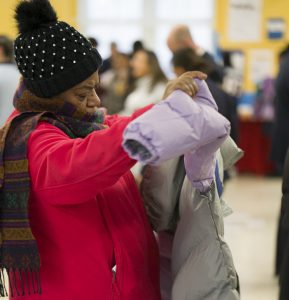 “Listen, it couldn’t have been a more appropriate time,” Mark Scheinberg, president of the Greater New York Automobile Dealers Association (GNYADA), said during the press conference. “I walked over from the Delancey Street Station, and there are people that are out in this kind of weather all the time, and it really drove it home.”

GNYADA is one of the coat drive’s biggest contributors. The association has donated over 43,000 coats over the years. In a conversation with Brooklyn New Service, the association’s representative explained that the group is uniquely positioned, having car dealerships in the larger New York Area to bridge affluent communities and their donors with residents of less affluent areas.

Gary Bagley, the president of New York Cares, said that his organization takes great care to provide the coat recipients with warmth and dignity. “We sift through to make sure that it’s a true winter coat,” he said. “As we always tell our volunteers, whatever we give out, we want to be something you would wear home today in whatever weather there is outdoors.”

Bagley explained that there are more donations of certain kinds, leading to shortages in coats for young children, toddlers, and larger men. He said that he is encouraging people to either bring in more of those types or to text COAT to 41444 to donate $20, which will go toward purchasing needed coats.

Bagley pointed out that the city has over 1.7 million people living at or below the poverty level. Over the next eight weeks he wants to bring in over 130,000 coats to have them put “onto the back(s) of” New Yorkers who need them. He added that “we could not do this in eight weeks without the help of our volunteers.” 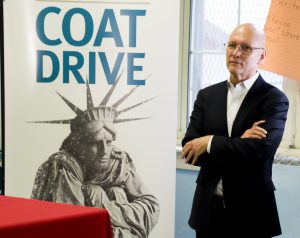 Janet Zagorin has been a board member of New York Cares almost from the beginning of its 30-year history. She explained to Brooklyn News Service that although the coat drive is one of the more visible aspects of the organization, it is in fact a go-between with many organizations and volunteers.

A volunteer for New York Cares, Patrick McGuire, explained that the coats are gathered at a donated space near Penn Station. He leads a team of about two dozen volunteers who sometimes put together two thousand coats in under three hours. He said that the work can be very hard, but they are very glad to do it.

“We know that someone is going to receive a coat, and be warm, because we are very lucky to have a coat and keep warm, so we want to extend that to fellow New Yorkers who are not as lucky,” he said.

← Newer Post
Face Transplant Gives Happiness to One, Hope to Many More
Older Post →
Rockettes Kick Off Season, With Reds and Greens and Shooting Star Scenes