The purpose of the event was to “explore cutting-edge ideas, technologies, and practices that can enhance quality of life and safety in basement apartments,” according to the event’s program.

Experts and enthusiasts alike gathered to present and discuss solutions to the many problems that arise with living in a basement apartment in New York City.

Among the topics touched upon were lighting, ventilation/air quality, fire safety, and habitability. 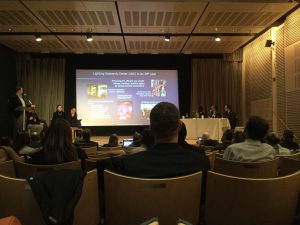 Much of the discussion was technical, as shown here. Photo credit: Shanika Carlies.

“Artificial windows and electric lights can be a solution to meet visual and biological needs,”  said Jennifer Brons, research scientist and adjunct professor of architecture at the Lighting Research Center (LRC).

Brons showcased her expertise, notably in the ways that light can be made to enter a basement area, allowing a person to utilize it as a living or working space.

New York City Councilmember, Brad Lander, of the 39th District, including Park Slope and surrounding neighborhoods, was a policymaker who attended Thursday’s event. Lander, Mayor Bill de Blasio and other councilmembers supported a bill to create a three-year pilot program aimed at creating apartments in basements and cellars of homes in eastern Brooklyn. The administration reportedly has invested $11.7 million in the pilot program. Statistics show that in the East New York section of Brooklyn, 75 percent of basement apartments are being rented illegally. If the program turns out to be successful, hopes are that it can eventually expand to the rest of the city.

Christie Peale, CEO and executive director of the Center for New York City Neighborhoods (CNYCN), expressed optimism in her closing remarks. She said she believes the city is taking steps in the right direction and is seriously trying to provide affordable housing options, as well as income possibilities, for homeowners in need.