Mail deliverers in America often have to do their jobs in housing complexes and homes that are also the residence of pets, sometimes dogs that can pose a risk.

The United States Postal Service held a press conference Thursday in Brooklyn Bridge Park on the topic of dog bite statistics as it pertains to mail deliverers. They stated that dog bites fell to 5,714 in 2018 – 500 fewer than in 2017. 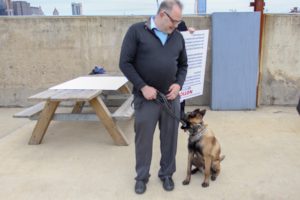 This is due in part to educating workers and customers about K-9 interactions. This annual push is not only done by USPS but also by the American Veterinary Medical Association, which holds its national dog bite prevention week from April 14 through 20.

USPS veteran of 25 years, Bryan Colletti, said, “As a carrier I’ve been bit twice, chased a bunch of times.” Colletti has run a charity foundation called “K-9 Crime stoppers” that donates trained police dogs. He’s been training dogs for almost 30 years. He’s personally trained over 60 dogs and they’ve been donated to police units, coastguard and more in need of a K-9 unit.

When asked what kind of dogs are more likely to chase someone, he had a quick answer. “Some dogs will chase you because they’re territorial, ‘This is my yard, get out…’,” he said. “Other dogs will chase you because they’re afraid and they’re scared so they’re putting on a threat display and that’s what little dogs do… they show their teeth they bark, they growl… they lack the courage to attack.”

← Newer Post
Workmen’s Circle is a Voice for Undocumented Immigrants
Older Post →
Nassau County Joins a Chorus: Save Our Children, Get them Vaccinated