By Jada May and Joseph Leo

The Star-Spangled Banner played triumphantly as Marine Color Guards stood erect at Cypress Hills Cemetery in Brooklyn on Thursday, and gathered families of veterans and others commemorated the deaths of World War I soldiers.

It was a beautiful kickoff to Fleet Week, albeit somber.

“If you stay in this place long enough these stones start to talk to you in a way,” said Dan Loeb.

Loeb, who is the grandnephew of the late Marine Dan Daly, spoke proudly of someone who he himself had never met. “I know him through family stories,” Loeb said. “[He] never really sought publicity for himself… when he passed away, they found his medals in shoe boxes.” Daly was a double recipient of the Medal of Honor. “That story that runs through me, it runs through America,” Loeb said, alluding to the hundreds of families that have stories of their ancestors who helped make this country what it is today. Not only that, but it is also alluding to the sacrifices that the military made, and continues to make, so that the rest of the country can live free.

World War I is still considered the bloodiest war in human history. I

t saw about 40 million soldiers injured or killed. World War I set precedent for how dark this world can get. It ended with the Treaty of Versailles. Ceremonies like the one on Thursday remind us how vital it is for Americans to respect and honor our country’s history.  The U.S. World War I Centennial Commission commemorative was an act created by Congress. It was passed to honor and recognize the centennial of America’s involvement of World War I.

The ceremony also honored French troops who fought in World War I alongside Americans, by having their names called by a French representative. As the names were called, French veterans gracefully walked next to each head stone, placing a French flag and dirt on top to show gratefulness and honor. The beautiful weather, ambiance and the scenery filled the crowd with pride and respect. As part of the ceremony, beautifully made wreaths were placed within the area of the honored solders.

To finish the ceremony, Marine Guards marched with protruding chests, and they shot their rifles into the air on que for those being honored. After the shots, a marine standing in front of a tree played the trumpet and people stood up from their seats with their hands over their hearts. Then the marines walked onto the long road with American and French flags held in front and marched back to the entry of the cemetery.

Every year New York has Fleet Week to allow members of the Navy and Marines to see the city lights and give the public the opportunity to meet some of America’s strongest. The public is able to go inside Navy ships and everyone can meet the members of today’s maritime services. 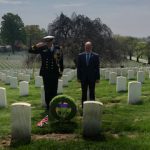 We honor you for your bravery 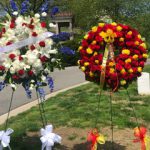 Please accept this gift from us 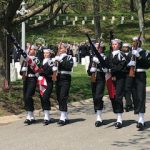 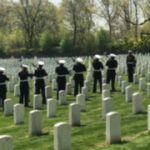 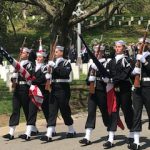 With flags and rifles in hand 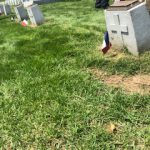 You sacrificed for us 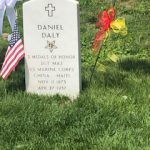 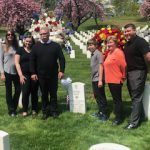 Credits: Jada May and Joseph Leo