On Thursday, New Yorkers placed flowers on the tombstones in Washington Square Park to memorialize residents who have died in the city’s growing opioid overdose crisis.

“Fentanyl kills and it’s becoming a huge problem in our city,” said BAM staff, appropriately dressed in black suits fit for a funeral.

The mock gravesites were staged in the park to bring awareness to the opioid epidemic. Passing park visitors were given obituaries that included data about the rise of fentanyl-related deaths. Organizers included BAM and The Recovery Spot, a substance abuse treatment center.

Fentanyl, a prescribed pharmaceutical pain-killer, has contributed to the rise in the opioid overdose epidemic affecting the nation.

In the city, 1,487 New Yorkers were lost to fentanyl-related deaths in 2017, according to data collected by the New York City Health Department. This is a 175 percent increase since 2010.  The statistics show that every six hours one New Yorker dies from an overdose. National statistics reflect a similar trend.

Dr. Ramesh Sawhney said that even those numbers do not reflect how big a problem it has become.

“Those numbers are grossly inaccurate because we know the number of deaths far exceed that,” said Dr. Sawhney, oo-director at The Recovery Spot. He says many deaths are reported as heart attacks or as the result of other medical complications. Last year, national data showed 60,000 to 90,000 opioid-related deaths. Dr. Sawhney believes the actual number of deaths exceeds 250,000.

“People don’t report because of the shame and the stigma,” said Eve Goldberg, founder of the Big Vision Foundation. “They don’t want to say my husband or my son died of an overdose.”

After losing her 23-year-old son Isaac to an overdose, Goldberg founded Big Vision to create a “community for young adults looking to have fun without substances.”

In recent years, dealers have begun mixing fentanyl with street drugs such as heroin, cocaine and xanax, resulting in deadly combinations. Buyers are often unaware of the dangers of mixing.

Thursday’s event featured speakers working to combat the crisis through activism and education. Ben Kimmel, a Certified Professional Life Coach, shared his story about his path to sobriety. Kimmel said he began using substances when he did not know how to cope with depression and anxiety.

“We’ve become a society that wants to treat symptoms, but what if we treat the problem? If we got to the problem, then maybe the symptoms will go away,” said Kimmel. This month makes 28 years that he has been sober. Now he strives to educate others about the resources available to fight the disease of addiction. 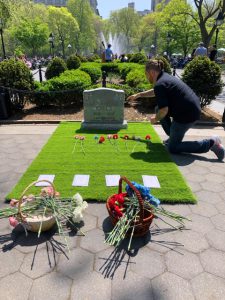 In response to the crisis, New York City has begun offering free Opioid Overdose Prevention trainings. The training teaches residents how to identify an opioid overdose and how to administer Narcan to prevent death. Narcan is a medication that can reverse the effects of an overdose.

Despite the city’s efforts, Dr.Sawhney warned that Narcan will not always save lives.

“In some cases, fentanyl will cause what we call a cardiac standstill and Narcan has no effect on it,” Dr. Sawhney cautioned.

Dr.Sawhney said there are ways other than opioids to treat pain, and those items methods are being used at The Recovery Spot. These treatments include Botox, which can successfully and safely be used as a pain reliever. Other alternative treatments include intravenous Ketamine or local anesthetics.

“The point through all of this is the need for education on really systematic and institutional level,” said Peter Grayson, CEO of The Recovery Spot.

“This is an very important issue,” said a Midtown resident who preferred not to be identified. “I almost lost a friend to an overdose just two days away.”

The middle aged woman said that her friend had to be rushed to the ER after using cocaine that had been cut with Fentanyl.