Music, particularly jazz, always contains a message. For Arturo O’Farrill it is this: “I have found that music consistently delivers that jolt of emotional growth and spiritual growth . . . Music will take you and cause you to have experiences that are outside of the realm of what you know.”

O’Farrill, the power of music has always been around him. That’s because his father, Chico O’Farill, was an Afro Latin jazz musician from Cuba. Therefore, Arturo O’Farrill not only had a taste of jazz in its North American form but its Cuban “son” (or sound) that gives it a distinct and even revolutionary flavor.

Since the election of Donald Trump as president of the United States, the social climate of the U.S. has been one of divisiveness. One of the largest divisions, both literally and physically, is the U.S-Mexico border, where Trump has been vowing to “build a wall.”

But the idea of a separation between neighbors has led Arturo to declare that we as a people in this hemisphere will not be divided. And this is the main idea in Arturo’s “Fandango Fronterizo.”

Fandango Fronterizo was held in the aptly named Friendship Park, located at the U.S.-Mexico border. It is the antithesis of the current global zeitgeist of division. If we were to put up high walls all around us in the world, we would create more divisions and the high walls would make it hard see each other and extend olive branches.

Fandango Fronterizo was not only symbolic but also practical. It was practical in its physical display of opposition to a wall as something that keeps people apart.

It was this idea that prompted O’Farrill to take a trip to that part of America (and the Americas). The trip led to the album “Fandango at the Wall,” which is designed with the message of unity through the meshing of cultures. Just as the meshing of cultures at the border permeates the United States and Mexico, it is done in the music that speaks to the cultures radiating through there. Music can break any barrier and shine a light that breaks divisions.

O’Farrill is a humanist, reflecting the issues of wholesomeness as opposed to individuality.

O’Farrill says: “I think the most important thing a human being could do is travel internationally. I just remember being 19 and being in the departure lounge of Lufthansa airlines and hearing people speak a foreign language for the first time . . . and just waking up in Berlin and seeing people go to work and seeing people with kids . . . It will humanize you.”

Music offered O’Farrill a new perspective on life outside his own bounds and it reinforced how similar we all are, as human beings throughout the world. Photos, videos, and paintings all show us something about the world. And music is a loudspeaker telling us what human beings are like at points in time and space.

[O’Farrill was interviewed by The Brooklyn News Service at Douglas Recording Studio in Gowanus.] 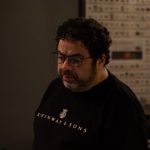 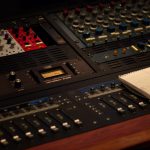 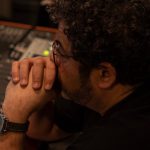