By Milette Millington and Austin Santiago

In a press conference Thursday, Mayor Bill de Blasio, along with Deputy Mayor Phil Thompson and others, called on the state to help New York City give better opportunities to small businesses run by minorities.

“We are pushing today for changes at the state level that would help us empower small businesses. We see tremendous opportunity if we can just get the tools we need from the state of New York,” said the mayor.

“It’s time for the state to help us go farther.” 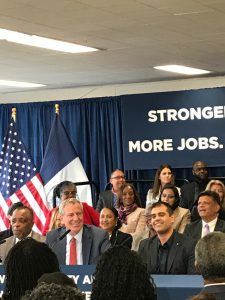 Deputy Mayor Phil Thompson said, “This is about creating real opportunity, not for a handful of people or a minority. Eighty-five percent of New Yorkers are women or people of color, so this is an 85 percent program.”

The mayor wants the state to allow the city to award more contracts by allowing them to increase their limit “from $150,000 to $1 million.”

The mayor said that for small business owners, this means that they “will spend less time filling out paperwork and more time growing their businesses and jobs.”

He added, “The doors of opportunity close in the city and this nation because of structural racism,” de Blasio said. “The game is rigged.”

The goal, according to the mayor, is “to see a whole lot of New Yorkers benefit.” He went on to say that “we cannot do it alone in the city of New York – we need the state to support us.”

The mayor added, “We will be the fairest big city in America. And there is nothing more fair than putting money in the hands of communities who for so long didn’t get their chance. Now they will.”

← Newer Post
Many in Big Apple (the City) Appreciate Apple (the Company). But Some Progressive Amercians Want to Control It
Older Post →
New Yorkers, Notably in Brooklyn, Feel the Pain of New Zealanders