The New York City Council’s Committee on Environmental Protection held a hearing at City Hall on Thursday to vote on an agenda focusing on changing the New York City building and administrative codes in order to cut down on emissions.

The committee has been working with building owners, architects, building experts and climate scientists for at least the last two years to come up with solutions in order to assist buildings in going green. This is not including the work that began with the passing of green laws as far back as a decade ago. Through their research, they’ve found that buildings account for approximately 70 percent of greenhouse gas emissions.

The passing of this significant piece of legislation is the single largest carbon reduction effort in any city and will, in fact, pave the way for a twenty-first century green economy, councilmembers say. 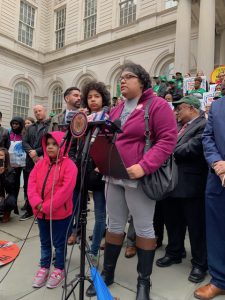 Single mother of six, Rachel Rivera and her daughters Marisol and Angelina told of their health struggles. Credit: Maya Dower-Johnson

Aside from creating good middle-class jobs for New Yorkers, the bill will take approximately one million cars off the road by 2030. It will also make for measurable decreases in nitro oxide, sulfur oxide and particulate matter that fouls the air and contributes to higher than average asthma rates. Starting with the biggest and dirtiest buildings will put the city on the path of meeting the 40 percent by 2030 (40 x 30) and 80 percent by 2050 (80 x 50) goal.

The New York State Energy Research and Development Authority (NYSERDA) has created the Property Assessed Clean Energy (PACE) Financing for building owners that will allow them a low interest loan to help cover the cost of going green. The property owner voluntarily agrees to repay the financing through a special assessment or special tax charge placed on their annual property tax bill. This provides financing for these types of improvements over time without requiring the property owner to make a large upfront investment.

Building owners who choose to go green will see a net gain through energy savings due to using newer, more efficient technology.

Outside of City Hall, environmental activists made their to the public. Rachel Rivera of New York Communities for Change painted a very distressing picture of what she goes through every day with her six children due to the aftermath of Hurricane Sandy. She shared a story of how she began hearing a cracking noise which led to the roof caving onto her daughter Marisol’s bed.
“She still to this day suffers from PTSD and she’s in and out the hospital constantly,” Rivera said of her daughter Marisol, 12. “When it rains too hard, she starts having flashbacks.” Rivera said that her five-year-old daughter Angelina suffers from respiratory seizures and she attributed the difficulties to the effects of climate change. “When it’s too hot, she’ll suffer from seizures where she’ll stop breathing. When it’s too cold, she’ll suffer from seizures where she’ll stop breathing.”

The city’s new legislation states that New York City will start phasing out use of fossil fuel power plants and allow wind turbines to be built more easily in the city. These two things alone send out strong signals in the clean energy market that New York City is ready to phase out fossil fuels and convert to a greener grid. The plan is to do it in a way to give New Yorkers flexibility as it takes into account everyone’s contributions to city emissions in order to reduce building emissions.

The climate emergency the city faces is leading legislators to say no to new fossil fuel infrastructure and new pipelines that will be operational for the next 30-40 years.

The committee has an opportunity to make sure that there is a sustainable New York for generations to come.

As time came to vote, the councilmembers were all too eager.

“This is an important moment for all of us,” said Councilmember Carlos Menchaca. “This is the most aggressive, fast-forward moving piece of legislation. I vote ‘aye’ on all.”

“The climate change world has impacted our black and brown families, our workers on the waterfront so this is a proud moment for my district,” said Menchaca.

Councilmember Kalman Yeger voted ‘aye’ on all but the unnumbered pre-considered resolution, to which he stated he was not for or against due to it not being introduced to the Council.

“We’re not in the position, in my estimation, today because we have not had the opportunity to duly deliberate on it,” said Councilmember Yeger. “For that reason and that reason alone, not on the merits, I abstain from the unnumbered pre-considered resolution and I vote ‘aye’ on the remainder.”

Councilmember Stephen T. Levin cheerfully voted ‘aye’ to all as he spoke about the Council’s “really extraordinary effort here to get the most far-reaching climate legislation out of a locality anywhere in the world.”

Levin continued, “I believe this is the most impactful legislation that we’ll be passing this term. It will stake New York City’s long term claim on doing our part to reduce carbon emissions and confront the global crisis of climate change. We owe it to our children and our children’s children to leave them a world that is, at the very least, no worse than the one that we inherited.”

Councilmember Eric A. Ulrich voted ‘aye’ on all without any additional commentary.

The hearing adjourned with a vote of six affirmative and zero negative.