The seniors were upset as they found themselves, for the third time, in a position where they could lose the facility they had been coming to every day, to socialize and participate in a multitude of activities.

During the meeting, Councilmember Cornegy said it’s “unacceptable to even have a discussion about cutting senior services, especially to centers like Sumner that provides such a great opportunity to our seniors to eat and to socialize and take time out of their day with their friends.” 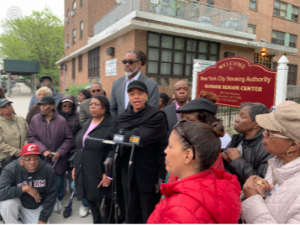 Assemblymember Wright made that point in her own words. “It’s absolutely ridiculous for us to use language of underutilization,” said Wright. “We cannot rely on somebody deeming something to be underutilized when we know that we see people like this showing up every single day.”

Cornegy said that community leaders are dutybound to help seniors remain connected. Seniors should not have to trek long distances across the city to make valuable social connections.

“We have a responsibility to make sure that our seniors can age in place, can be with their family and friends in close proximity to their home,” said Cornegy. “So that proposal (of Mayor de Blasio), to us, it doesn’t make any sense.”

Wright added, “We want to make sure that everyone has what they need to live successfully, healthy, full lives in our community, and senior centers, such as our Sumner Center, is exactly what does that . . . I am here to remind our mayor, as well as our city council and everybody else watching that our priority are our seniors.”

Included in the mayor’s Fiscal Year 2020 Executive Budget, which was released on April 25, de Blasio sketched a plan to close 12 senior centers and consolidate them with other senior “clubs” throughout the city operated by the Department for the Aging (DFTA). The City Council responded to the budget by calling for $3.1 million to support the 14 senior centers that are under NYCHA management. However, the Mayor’s plan would consolidate and/or close seven centers currently managed by NYCHA and five additional centers currently operated by DFTA.

Seniors at Sumner Houses would then need to travel about 1.5 miles away to the Ridgewood Bushwick Senior Center in Bushwick for senior-specific programming. That distance may not seem like much to young people, but to the older New Yorkers it could mean not being able to go to a center.

Referring to de Blasio’s plan, Sumner Houses resident Rachel Smith said, “I don’t think it’s a good idea cuz you got some people who really can’t do that traveling and they’re right here in the neighborhood and some of them come every day, faithful.” Smith has lived in the Sumner Houses for 40 years.

“Where would I go everyday if I didn’t come here? I don’t know what I would do,” said Crystal Todd, who has lived next door to Sumner Houses for 20 years and attends daily. “I’m definitely not going to get on no bus and go anywhere else. It has a lot to do with your health. Getting up and coming here every day, I’m rejuvenated by this.”

← Newer Post
Replacing Jumaane Williams is a Long and Wearing Process. Voting Comes Next Tuesday
Older Post →
The Spotlight Thursday was on Anna Delvey, Socialite Who Stole Hearts and Money