“Words are a beginning but action has to happen,” said Dr. Gail Mellow, President at LCC. “Action is about coming together.”

The theme for this year’s summit was “Theory, Action and Expression for Today’s Student,” and the goal was urging students to be engaged in local activism. The summit included keynote addresses from civil rights activist and journalist Shaun King and hip hop artist and activist Talib Kweli. 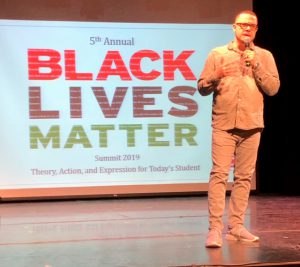 “We are in a desperate and problematic time in the history of this country,” King said, highlighting recent hate crimes such as the Pittsburgh Synagogue shooting. The October attack was the deadliest attack on the Jewish community in the US, killing 11 people.

While speaking to the audience of college students, King discussed ways that young activists can bring about reform to combat inequality and injustice.

“We are masters of our pain and of our problems,” King said. “But knowing your problem is not the same as having a plan.”

Acknowledging the limited access to resources, King advised other ways that the students can cause change. He shared the importance of organizing highly energized people and devising a plan.

“When we talk about police brutality or when we talk about mass incarceration, those problems are enormously complex,” King said. “Our solutions to our problems have to be as nuanced and sophisticated as the problem itself.”

In February, King relaunched the historic newspaper The North Star. The North Star was an abolitionist paper founded in the nineteenth century by writer Frederick Douglass.  King says he faced challenges in the relaunch but he did not allow those obstacles to discourage him.

“Don’t allow the possibility of failure convince you that you are not ready,” he said, hoping to inspire the room of students.

“The best companies and organizations that are going to change the world, you have not started yet.”

“Every day we see so many things wrong in this country, but we don’t know how to really help,” Brown said in an interview. “Being here today made me realize, I have to do more than just talk and tweet. I have to get involved.